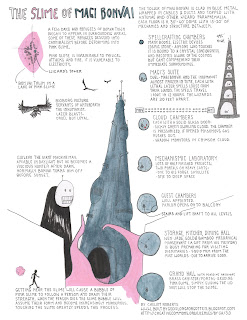 I have fallen in with a bad crowd. The sort who hammer out a dungeon in just half an hour (though this took a good 45) as inspired by the Bogeyman.

I'd like to try it again and stick to the time limit. This was an enjoyable exercise, I normally start by drawing a map. It was fun to try a different process. I was not thinking about politics when I wrote it, I really wasn't. Here it is, typos and bogus autocorrects and all:

The Stump Tower of var Haran

Hook:
If the wizard in your party wants a certain spell, there is rumor that a wizard who dwells to the north has it and is happy to trade spells with the rare visitor.

Background:
Baraghaul var Haran (BvH) is the wizard. He lives by a lagoon to the north. He does in fact have the desired spell but the rumor is a falsehood he spreads to lure weak and foolish spellcasters to him so he can steal their spells.

BvH lives in the massive massive hollow and broken trunk of a fallen tree upon which a bronze onion shaped dome has been placed and fastened. BvH is a metalworker. He is paranoid but not without a certain charisma. He is a tall skinny man who wears layers of diaphanous robes over a grimy union suit. His hands and feet are the claws of vultures.

Next to BvH's dome topped tree tower there is a long stone hall with a partially carved in roof. Since the hall was built the edges of the  lagoon have swelled and the hall is now about half on land and half in the water.

NPC:
Resting atop the domed tree trunk tower is a black gull. The creature named Arturic is intelligent and cursed. He will attempt to warn the PCs of the danger of BvH and the lion but he speaks only the language of ancient Helleth.

Encounter:
Tree tower entry hall. This room is appointed with what used to be fine rugs placed over stone and ceramic tiles. Some flagstones, some roof tile that have been repurposed.  The entry hall is stalked by a dire lion who is invisible except for his mouth: a crooked maw full of long odd angled teeth like the knives of a deranged and murderous chef. The lion's name is Hoivre. He loves jokes and will ask visitors to tell him some. He will eat them when they run out of jokes. The lion always laughs at what BvH says, even when it's not funny. (BvH has charmed him)

Empty:
From the entry hall there are a number of ladders. One leads up to a large wooden platform with a few benches, pots, pans, knives a rake, a shovel. A pot stove and barrels of food. Through a slim hole the stovepipe exits one can get a slight view of the lagoon.

Encounter and Magic Items:
Up another longer ladder leads to the top chamber where BvH can most often be found.
This room has an open view to the lagoon. There is a large trunk, so large it has been nailed to the I side of the tree trunk. Inside there is a very very heavy full body leather suit with a quilted coif. Inside the suit there are lead sheets and strange filaments. The suit protects as leather armor, but slows the wearer as if they were wearing plate. The suit negates all magic effects directed at the wearer.

Baraghaul var Haran
level 6 magic user
AC 14 HD 6d4 dmg by spell or dagger or wand of paralysis with 3d4 charges.
He also has a metal disk 24" around and 1/4" thick that functions as a floating disc or levitate spell if a magic user or psionic steps on it and wills it so.

Trap and treasure:
The longest ladder leads up into the onion dome. Near the top of the ladder there are three false rungs that will break away. Save or fall for each one. Inside the onion dome is where BvH keeps his stolen spellbooks. He has most first and second level spells, and a few third level.

Empty:
Out behind the tree trunk tower is BvH's crude foundry under a large tarp fashioned into a lean-to.

Empty:
The dry end of the long stone hall:
The roof has mostly caved in and this area is full of old machines, some iron and rusted, some bronze and not. BvH has chipped away at and otherwise borrowed bits of the machinery

Encounter:
In the wet end of the long hall (underwater) dwell a group of 3 fish men who are strong and capable and jealous of the lion.
AC 15 HD 3d8

Weird:
Outside the submerged end of the long hall in the lagoon there is a verdigris statue of a slightly abstract woman. Touching the statue will allow anyone to receive a message left at the similar statue of a man far far to the south. This is how BvH communicates with his agents. There is a massage in it that says "more are coming." And then includes descriptions of the PCs.

Thouls are undead abominations. Patchwork creatures, they possess a strangely refined version of the canibal cravings of ghouls. They will chew off a part of a victims body, eat it and then remove and sew on that same part from their own body. The victim will then become a thoul, filled with a similar craving. The thoul's own body will regenerate, though that part of their body will be larger or somehow more mishapen than it was previously.

Zombies in the land of the dead are very rarely of human corpses. Large and exotic zombie beasts are seen in herds or alone on occasion. These creatures are passing fads among the Lords of the Underworld. Now it may be a status symbol to have the largest herd of zombie stegasauri, but next week it may be more fashionable to have a single large zombie tiger, trained to perform tricks.

Among the Lords of the Underworld, as in the World We Know, there are those who cling to yesterday's fashions.

Hobgoblins are goblins who have been forced to wear shoes. This contains their wickedness and they grow to be larger than a man. Some particularly wicked goblins will continue growing until they are quite corpulent. Hobgoblins are not capable of removing their shoes.

Hobgoblins who serve evil wizards or witches may be found to have black ooze inside them if they are killed.

Hobgoblins are not often found in the Land of the Dead, to encounter them there is a sinister auspice.

Eating and sleeping is not necessary in the land of the Dead, but having a meal may heal wounds here. Eating the food of goblins may be healing, but it may also have other queer effects.
Posted by Lum at 10:36 PM

The Sea of the Dead III

Hazards on the Sea of the Dead include the Mists, the nightmare creatures born from them, and Wraithwind, particularly if controlled by someone skilled.
Falling into the Sea is near certain death-the Dead are eager for company.
Madness is also an affliction that is common among the few living ceatures found in the Shadow Realm. Clerics of neutral gods with the gift of speaking to the Dead are particularly prone to the Madness.

Email ThisBlogThis!Share to TwitterShare to FacebookShare to Pinterest
Labels: Sea of the Dead
Older Posts Home
Subscribe to: Posts (Atom)