If a Magic-User character has access to a library then at the beginning of each session they can roll to find some juicy rumors or clues to locations of ancient treasures.  Each Library has a level. Pretend like the library itself is a Magic-User according to your favorite Adventure Fantasy Game rules. The amount of gold that the books are worth is the equivalent level of the library. The M-U can roll for a chance to find a clue to a treasure of the equivalent level by rolling under his INT on a d20, or they could try for clues to multiple smaller treasures that add up to that level.

For example, if your library is worth 2500 gp, then it's second level. The M-U can roll once to try and find a clue to a Lvl 2 treasure, or she can roll twice to try find two Lvl 1 treasures.

There is a catch to looking for clues in shared libraries. Like if your M-U doesn't have their own library and they have to use their mentor's or the library at the Wizard Guild or whatever, then for each clue they have to also roll a d6. On a 1 or 2 there will be someone else who is also looking for that treasure.  The DM will need to roll up a NPC wizard and his or her accomplices and load this other adventuring party into the encounter tables.

Now for laboratories. These are the places where magic items are made. But I'm not satisfied with the pseudoscientific images of beakers bubbling and alembics smoking or whatever alembics do. And really it comes down to just spending GP and a few weeks.  I want making magic items to be a whole kind of adventure. Bear with me now, this thought is half formed, but I want it to be a bit like this:
"As he took his father's sword the young man thought of the witch.
It was scarcely dark in the valley when he left the Castle of Erl, and went so swiftly up the witch's hill that a dim light lingered yet on its highest heaths when he came near the cottage of the one that he sought, and found her burning bones at a fire in the open. To her he said that the day of his need was come. And she bade him gather thunderbolts in her garden, in the soft earth under her cabbages.
And there with eyes that saw every minute more dimly, and fingers that grew accustomed to the thunderbolts' curious surfaces, he found before darkness came down on him seventeen: and these he heaped into a silken kerchief and carried back to the witch."
-The King of Elfland's Daughter

I think maybe making a magic item starts just the same way that scribing a spell does, by finding some bit of lore or weird item that clues the M-U to the potential existence of the item. Just like with spells, this initial piece gives the Wizard a 1/6 chance to make the item. Finding more bits will increase his chances. Aha! Maybe the adventure hook system for libraries above could also have clues about items or bits of lore the wizard has found.
Example: In his travels a Wizard finds a few worms in a jar that appear to fade into and out of reality. But what are they about? The next session the wizard rolls for clues in his library and finds mention of phase worms, which can be used to fashion cloaks of invisibility. Now with just the worms the wizard could roll to make such a cloak, but with only a 1/6 chance of success. He instead decides to try and find more bits of lore and weird items.
That's a wise choice, because a failed attempt to make a magic item results in a cursed or flawed item.

Alright, that's enough for now, here's more Dunsany:
"Nobody can tell you about that sword all that there is to be told of it; for those that know of those paths of Space on which its metals once floated, till Earth caught them one by one as she sailed past on her orbit, have little time to waste on such things as magic, and so cannot tell you how the sword was made, and those who know whence poetry is, and the need that man has for song, or know any one of the fifty branches of magic, have little time to waste on such things as science, and so cannot tell you whence its ingredients came. Enough that it was once beyond our Earth and was now here amongst our mundane stones; that it was once but as those stones, and now had something in it such as soft music has; let those that can define it."
Posted by Lum at 2:54 PM

What's in the spell book of the evil wizard or sorceress?

These are spells for the bad guys in pulp-inspired fantasy adventure games. These'll work best if the PCs see the evil wizard cast one on some poor schmuck, then later the PCs find themselves in the same situation. 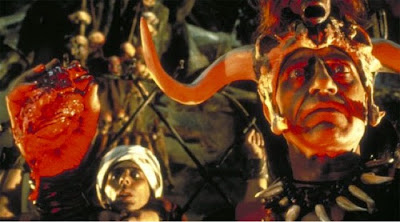 Desiccate
M-U Lvl 2
Range: touch
Duration: instant
The Magic-User must place his hand on the victim and hold it there for a full round. The victim may take an action during this round if they are able. At the beginning of the round immediately following the victim's body is drained of moisture and they lose 1d6 HP per level of the caster.
Optional: after casting this spell the Magic-User becomes bloated and corpulent for d6 turns after which he vomits copiously. Roll 1d6:
1-2: it's a random potion
3-4: it's poison
5-6: it's just gross

Viper Kiss
Cleric Lvl 4
Range: touch
Duration: instant
Any person kissed by the caster must immediately Save or Die as if poisoned. Their skin will turn pale and their veins will turn dark green.

Gift of the Viper Goddess
Cleric lvl 5
Range: 30'
Duration: permanent
This spell will reincarnate one corpse into a monstrous snake-man who will do the bidding of the caster. (HD: as caster -1, AC: as chain, MV: as man x1.5) the cause of death of the corpse must have been poison or a poison-like effect.

Slime Ray
M-U Lvl 4
Range: 100'
Duration: instant
A glowing ray shoots from the caster's finger and any target struck must Save vs. Death Ray or transform into a random slime, mold or jelly.  If the victim is carrying a shield it may be sacrificed to automatically succeed at the Saving Throw.

Email ThisBlogThis!Share to TwitterShare to FacebookShare to Pinterest
Labels: magic

I've read a lot of different versions of D and D type fantasy adventure games and even when a lot of creativity is focused on other parts of the game, spell research is neglected. If it's even included at all it's almost always some variation of a boring formula of gold pieces and weeks spent during down time. I know some folks like detailing what their characters do during the time between adventures but it is always going to be less interesting than what happens at the table and I want Spell Research to be interesting so what if:

And the inverse:
Spell Research = Adventures

In other words, for Wizards:
Spells = XP

For all Wizard/Magic-User PCs to gain a level they must research, learn, cast and copy into their spell book a spell of the next highest level.

RESEARCH:
This is what a Wizard is doing every second of every adventure. Scattered about the Mythic Underworld and the rare places above ground there are clues to the possible realities of Spells. These clues are: runes, spellscraps, ectoplasm, odd references in ancient tomes, mystic graphitti, grimoires, other wizard's spell books, scrolls, pixie dust, eye tyrant goo and other creature bits, magic items, etc. when a Wizard finds one of the above the DM may tell the Player that they have gained a x/6 chance of casting the spell. This will usually be 1/6 but could be more especially for rare and powerful items like another Wizard's spellbook. (Read magic would have to be cast of course)

Yes this makes the DMs job a little bit harder which I am normally completely opposed to but I think it will make the game a lot more awesome so buck up and add some things to those treasure tables.

LEARN
It is assumed that Wizards are constantly obsessing over these weird bits of trash from other universes that they keep buried in the folds of their robes.

CAST
Anytime a wizard has at least one clue they may attempt to cast the spell.  The first time this will take 1d6 rounds per level and can be attempted once per spell per adventure.  Consumable items (potions, scrolls, chthonic cupcakes, etc) will be used up in the attempt.

COPY into Spellbook
Now the spell can be cast per whatever your rules-as-written or house rules about Spellcasting are. Here's an idea for the latter:

To cast a spell a Wizard must do one of the following:

(Spell Components have to be written on the character sheet, you can't be like "of course I'm carrying fungus that has been sneezed on by a priest and a butterfly simultaneously I'm a WIZARD..." This is more work for the DM again because they have to come up with a Component for every spell but at least you can make the player keep track of it and you could wimp out and just make it 1d6x100 GP/Spell Level and it wouldn't bother me too much. This post is about making spell research fun and interesting not spell components. I'll leave that for the next guy)

I'm tempted to say that
Level = Mana per Day
that way we can get rid of spell progression charts altogether.  This'll also encourage slow casting which sounds exciting and evocative of genre fiction.

I have some other ideas about how Libraries and Laboratories could fit into the above Spellcasting system but that'll have to wait for another post. 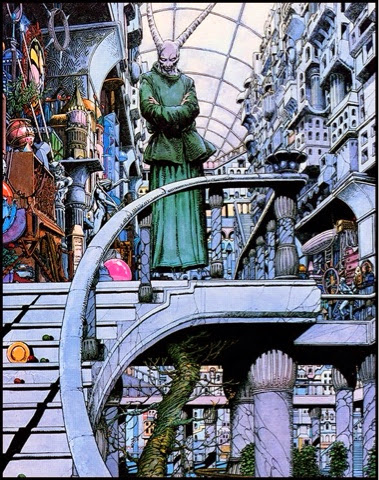