I recently watched The Devil's Sword. I picked it up because the back of the box called it "One of the triumphs of Indonesian fantasy cinema." I recommend this flick for it is a mighty bounty of D&D-able moments.

It starts of with a comet falling and an old guy with a (wolf?) head staff makes a sword out of glowing ore from the comet. He puts a wolf head pommel on the sword. Banyunjaga (below) has a pair of swords with croc head pommels. I think all of the swords used by the main characters have animal head pommels. Who needs detect magic or identify when all you need to do is look to see if it's got an animal on the pommel?

THE CROCODILE QUEEN:
She emerges from water with her servants after a red cloth flies out of water. Her servants wrap her in the red cloth and when they unwrap her she’s magically wearing fancy clothes. Do your NPCs do things like that? They should.

There’s a cage of cannibals just kind of randomly placed in a corner of the Crocodile Queen’s Chamber. What could go wrong there?

The Crocodile Queen has a white leather couch and the back of it looks like a white leather crocodile. This couch is really a marvel to behold. Look, this is a silly movie. but if your open to the kind of aesthetic experience exemplified by this couch then you'll get a lot out of it.

BANYUNJAGA:
He's a warrior who serves the Crocodile Queen. He emerges from exploding rocks laughing maniacally, then kicks a boulder, jumps on it and flies to where he wants to go, laughing maniacally the whole time. This is how you do NPCs.

There he goes. Hahahaha!

Other times he just pops up out of the earth. Is that a thing in martial arts movies or Indonesian mythology? Other characters do that to, including the crocodile men.

Crocodile men are always lookin' for a tussle.

THE BRIDE AND THE OLD WOMAN:
Banyunjaga breaks up a wedding party and it’s the bride who has a big fight with him while the groom waits on the sidelines/hides. In this movie the female characters duke it out along with the guys, they are generally interesting and have agency though things don't end well for most of them.

This lady is a bad-ass.

There’s a lot of really truly crazy martial arts action. The bride makes this whirlwind/wind gust attack by spinning a parasol. One guy's weapon is a hat on a string. Banyunjaga does this decapitating scissor attack with his two swords that's pretty great, and I'm not even going to tell you what the old lady does.

There's a fight outside of the cave where the Devil Sword is just to see who gets to into the cave. That is definitely something I'm going to use. Before the fight one guy magically creates graves for the others just to show how hardcore he is, which should be a thing you can do in D&D. It's easy enough for the DM to throw in little magical or quasi-magical flourishes like this for the NPCs but I think the PCs should have a way to do it to. Depending on the flavor of your game everyone could do it, only characters of a certain level, or only M-Us and again depending on the desired flavor this could be a "signature move" or something like the above example that is clearly magical.

The evil warriors refer to themselves as "The Evil Warriors"

Wait, was that Conan shooting a fireball in that ridiculous picture in that last post a while back?

Why yes it was. 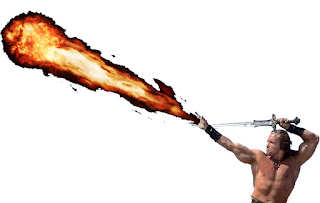 Here's a new class for Swords and Shenanigans or Lamentations of the Flame Barbarian or Labyrinths and Lizards that uses those Magic Words we were talking about:

Prime Requisite: Strength and Charisma
Save as: Fighter
Hit Dice: as Fighter
Weapons: as Fighter
Armor: Leather, wool or none
Spell Progression: as Cleric, but can only cast spells that have FIRE in the name. No spells at first level means your BARBARIAN FIRE WIZARD just has to set fires the old fashioned way.
XP Progression: as Dwarf.
Special: Barbarian reflexes. +1 to AC per level up to double Charisma modifier.

Spells particularly suited to this class:

There are some more great fire related spells in this.