I haven't been posting much, but I have been gaming, and I'll likely be doing some more over the holidays.  I'm gathering resources to do a by-the-seat-of-the-pants Megadungeon.  I'm thinking about giving the Players a giant version of this map.  (can you spot the modern architecture?)

I'd say that the Castle has been ruined and shrouded in terminal mist for generations.  Perhaps the map is from one of the masons who worked on the castle before it fell to ruin.


We'll run it in LotFP with as few house rules as I can manage to limit myself to, Likely these:
aaaand I think that's about it.
Here's a Castle Name Generator: 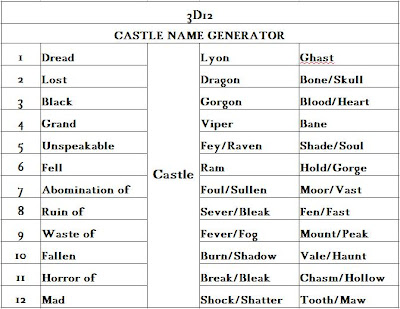 So now you too can find out what the Mad Lords of Castle Gorgonmaw have been up to!
Posted by Lum at 7:42 PM

I got to play a dwarf today who's chief weapon/dungeon exploration implement was a shovel.  I really think that shovels are going to be the weapon/dungeon exploration implement of the future.
Sooner or later I suppose the DM will get sick of it and say the shovel breaks, then I'll have to hire a shovel-bearer to carry my PCs extra shovels.  Seriously, if I were in a dungeon there are way more situations that I would want to have a shovel than a sword.

1. Occu-tonic:
Eyes sprout out of the palms of the imbibing character's hands.  These eyes can see invisible and have infravision.

2. Tonic of tongues:
a mouth sprouts of the palm of the imbibing character's right hand.  The character is able to comprehend languages, and the hand-mouth can speak any language.  There is a 1:6 chance that the mouth does not say exactly what the character wants to say each time it speaks.

3.Oracular Somnambulation:
The imbibing character imediately falls asleep and begins to sleep-walk.  He/she will walk in the shortest route possible to the nearest secret door and attempt to enter.  While sleep-walking the character cannot fight and will be automatically hit if attacked.  If the character crosses the threshold of a secret door he/she wakes up.

4. Basilisk Blood Brew:
The imbiber's skin turns green and scaly for the duration of the potion, and he/she is immune to turn to stone effects.  At the end of the potion's duration the clothes and/or armor of the character turn to dust.
Posted by Lum at 6:05 PM

I've had this post partially completed for a while and the discussion about elves at 9 and 30 kingdoms and Strange Magic has inspired me to kick this out:

This could be used for all elves in a campaign, or an optional variant sub-race, perhaps called "Moon Elves".

Origins: All elves descend on silver chords from one of five invisible moons.
Physical Characteristics:  Elf PCs roll 2D12 and use the result that is closest to 6 as their hieght in feet.  roll another D12 and add that many inches.

Alignment:  All elves are in love with the world.
Some elves are driven to jealousy  and plot against or destroy all other living creatures. (Chaotic)
Some elves love all creatures and would not knowingly destroy any creature. (Lawful)
Some elves blame one type of creature (randomly determined by DM) for all of the problems in the world and will hunt and kill that creature type.  (Neutral)

Beliefs: Elves believe that by doing one of the following they will be granted a wish once in their lifetime:
1. ringing brass bells at midnight
2. dancing nude for at least 30 minutes every day at noon.
3. weeping every evening
4. fasting every other day
5. never refusing a request for drink
6. eating wild mushrooms
7. singing before every meal
8. feeding all wild animals
9. telling strangers fortunes
10. never lying
11. talking to plants
12. fighting to the death

Elves and monsters: All ghouls were once elves. These undead come form a time when elves varied more in height than they do today, simply roll 1D12 for ghoul's height.

Elf levels: When an elf gains a level the player must roll 3D12.  At least one die must be higher than the elfs current level.  If none are higher, the elf returns to the invisible moon of his origin and is never seen in the world again.
Posted by Lum at 1:07 PM

I've made a table that remixes the more monstrous creatures from the group that Sham categorizes as "Fairy Tale Miscelany": Centaurs, Pegasi, Treants, Unicorns, Hippogriffs, Rocs and Griffons.  The idea here was to do the same thing with these creatures that I did with Slimes Molds and Jellies (That's a revised S, M, J pdf there, reformatted to fit on a 8.5x11 portrait).

Remixing the above "fairy tale" creatures the way I have can lead to some weird results... such as the Winged Tree Lion! Testing this, I rolled Eagle, Tree, Lion with the Special Ability: Teleport.  So this creature has Eagle clawed hind legs, I'll say that it can fly by vibrating translucent blue-veined leaves that cover it's "trunk" and the lion head has a mane of ivy with brillain colored mushrooms hidden within it.  and the PCs just met D6 of them.  (what happens if you eat those mushrooms, hmm?)

BEASTS OF THE FEY WOODLANDS


Also, check out the info to the right on Old School Gaming in Sacramento if your in the area.
Posted by Lum at 10:54 PM