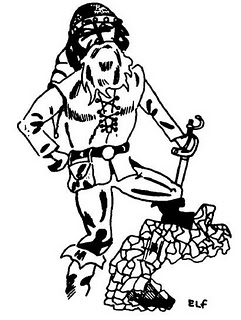 For a thoughtful discussion of elves with beards try this

Instead of a thoughtful discussion I'll give you a list of why Elves don't cut their beards off:
Elf PCs roll a D6, and disregard the result if they're lady-elves.
Posted by Lum at 9:45 PM

The first table allows a treasure hoard to be generated very fast.  Roll all the dice in a hoard at once and there you go.

The second set of tables for Magic Items is the same idea, but it requires a bit of interpretation on the part of the DM.  For example, what does an amulet that detects healing do?  Maybe it allows the wearer to know the HP of other characters and creatures in it's presence, or to know the location of the nearest shrine or healer, or to know the location of every shrine or healer on the continent.  how about a dagger that creates/summons undead?  That's easy, any creature killed by this dagger rises from the grave!

What this set of tables does:
It takes the sort of familiar magic items and effects you might find in your favorite fantasy game and forces the DM to creatively remix them into unique items.

It might be better to roll on this beforehand rather than in game to give yourself time to determine the exact nature of the magic item.  Multiple magic items could be randomly generated and placed as needed.

Here is the pdf:
Treasure Hoards and Magic Items
Posted by Lum at 9:18 PM

Playing a covenant of wizards in old school D&D?

I have always been fascinated with the game Ars Magica.  (free download of 4th edition rules is available at this link) The closest I ever came to playing it was a game where we were wizards in a post-apocalyptic setting with various robot and mutant animal underlings.  For that game we created characters in at least 2 different systems (neither one was the system published in Ars Magica) and just used whichever set of rules that was apropriate for the character in question to resolve actions.

But that's not why I wanted to post today.

I've been thinking about running an Ars Magica style game with a D&D type system.  Other folks have written about this here and here. The thing is, is that while I love the idea that Wizards are the main characters and that clerics and fighters and merchants or whatever are just the hired help, I'm not really excited about the intricate Ars Magica game system.  So, what if you just took that concept and used, oh I don't know, B/X D&D rules as written.  (or at least started with that and made as few changes from there as necessary)

You could start with Magic-users of high level to aproximate the power of Ars Magica characters, but I think it'd be more fun to start with 1st level wizards and build a covenant from the ground up.
PCs can hire a bunch of mercenaries and shield-bearers and head into the dungeon looking for bits of magic.

Change I would make to RAW:
I think it'd be awesome.

Email ThisBlogThis!Share to TwitterShare to FacebookShare to Pinterest
Labels: MAGHEIM

Even if you are not in the camp that says all monsters should be unique, it can be a challenge to find or create monsters that savvy players can't just easily metagame their way through.  To help alleviate this challenge I created this chart that allows a DM to quickly create a remixed version of the slimes molds and jellies of classic fantasy adventure gaming.  This chart can be used on the fly or when preparing a dungeon.  Personally I think it works best when used to generate an ooze or two to give various rooms or regions in a dungeon a specific flavor.

Please download and let me know if you use it: