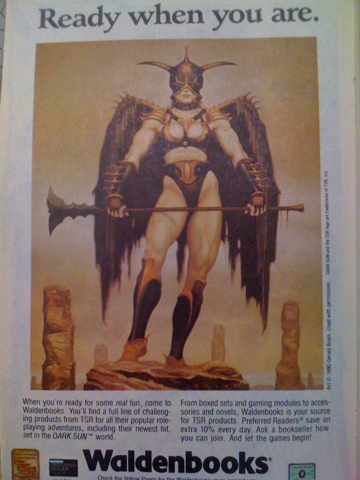 Obviously, If you had any choice in the matter, you would go to the game/comic store hidden away in a basement downtown.  But if for some reason you had to go to the mall, this would be waiting for you there.
Posted by Lum at 8:55 AM

I called the tables I sketched out in my last post "encounter tables" but that doesn't seem like the right term. One table answered the question, "what are the monsters doing when the PCs encounter them?" and the other answers the question, "what are the monsters going to do this round?"
I've used Telecanter's brilliant and all purpose 'what' are the monsters doing' table, but having a quick little table like this for specific monsters seems like a good way to jazz up encounters in a way that gives a particular monster a unique flavor, as well as making combat more exciting, cinematic and interesting. I think I got the idea for the "what do the monsters do this round?" table from the 4th edition thing where instead of encounter or daily powers, the DM rolls a d6 to see if a monster does a special attack. So a dragon, for example, instead of getting 3 uses of their breath weapon in a day, they let it loose on a 5 or 6 on a d6 that the DM rolls ever round. This takes a decision out of the hands of the DM in a way that I think can be interesting, at least sometimes. Another way to do this would be with 'Kung Fu dice' which is a thing that I'm pretty sure I first read about on D&D w/ pron stars, but I don't know that Zak invented it. This uses the d20 attack roll instead of a separate roll, which is pretty slick, but I don't think it's a big deal to roll another d6, you can roll it at the same time as the d20 attack roll and read the results at the same time. With the d6 you can also use the to hit roll if you need to.

This kind of table seems like a really good tool, I wonder why I haven't seen it more often? Or maybe lots of folks use it in published adventures and supplements an such, I just haven't picked them up or heard of them...
Posted by Lum at 12:59 PM

I feel like celebrating the return of the Dungeon Dozen to the internets so here's a few super specific encounter tables:

These use regular old d6s rather than the exalted dodecahedron.


What does the Moon Beast do this round?
1 run away. They'll stop in the next room and attempt to ambush anybody who follows.
2 knock stuff over, onto PCs if possible. If the only thing available is a person, they'll knock them over and stand on them. Save vs paralysis/fortitude/yeti stompin or take d4 dmg. Save again to act or wrestle free.
3 amazing leap onto the largest inanimate object nearby and screech/howl loudly. The following round a return call of screeches/howls may be heard. Another 1-3 Moon Beast 4-6 two Moon Beasts shows up in d6 rounds.
4 pick up one PC and throw them at another PC. Both PCs Save vs paralysis/fortitude/yeti stompin or take d4 dmg
5, 6 attack w claws, two attacks: d6 dmg. each.


What's up with the Ghouls in this room?
They are:
1 Ravenous. as many as possible will attack and attempt to devour whoevers in front. Attacking them back will draw their attention away.
2 Curious. They're throwing everything not nailed down around as if they were 2 year olds. If spoken to they will grunt back in imitation, and speak Ghoulish. they'll continue this for d3 rounds at which point they'll realize the PCs are food an attack.
3 Sullen. Theyll fight but 1-2 on d6 chance of running away every round.
4 Fighting eachother over a 1-3 live 4-6 dead thing.
5 Stalking something else, roll another wandering monster.
6 Awaiting the PCs in ambush.

All Ghouls used to be elves. They are 1-12 feet tall, and are from an invisible moon, where the elves sent them. They are not very bright, but they do have their own language, Ghoulish, which is a gutteral perversion of ancient elvish.
Their claws cause paralysis just like the book says.
Posted by Lum at 1:01 PM