The most underrated of dungeon exploration equipment is: 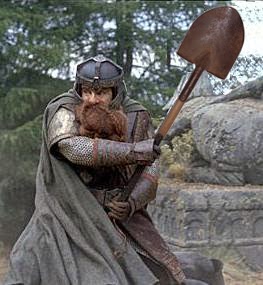 I posted way back a million years ago about playing a character who's main weapon was a shovel. Durn the Dwarf, bearer of the rune shovel died in a dismal cave. Talysman was running the game and in fine old school fashion when the dice said that Durn died that's what he did. I was thinking today that the shovel really is a top notch dungeon exploration weapon/tool. Maybe the western martial arts crowd would say that there's no room for such an unwieldy two handed weapon in a dungeon environment, but I think I'm not going to worry about that too much in a game where the dwarves who are famous for dwelling underground (in presumably tight quarters) are also famous for wielding big axes and hammers. What I mean is, in a world of 10' corridors it hardly seems like an issue. Though if the caves did suddenly get all realistically twisty and narrow what better than a trusty shovel to make a bit more room for the broad shouldered barbarian? If these games were realistic then dwarves and goblins would be crawling around in the dark in tunnels too small for humans and I doubt they'd carry much more than a shiv or two.

Ah but if your after realism then the shovel is the first thing your PC should pick up when spending their 3d6x10 gold!  Let's look at a potential real world situation: Say you come across a rabid raccoon attacking your neighbors cat and you must rise to the occasion and intervene. What would you rather have a knife or a shovel? Are you going to bend over and take a stab at the raccoon? That would be rediculous, certainly far more dangerous and nerve wracking than being able to put the shovel between the two animals and if you had to be more forceful you could from a safer distance. Heck, I think in that situation a shovel would be preferred to a .22. You might hit the cat after all.  Now, if this situation sounds like it has nothing to do with D&D, look at your preferred 1st level monster list. A lot of those creatures resemble a rabid raccoon! In size, temperament or both.

But a shovel is a ridiculous weapon you say? Let's look at the Level 1 Wandering Monster table. Of the 20 entries on the table 9 (almost half!) are  monstrous creatures the shovel could be used to chop or swing at. These are creatures like the fire beetle and the spider crab as well as the aerial attackers: the killer bee , the sprite and the stirge. 10 on this list are humans or humanoids. They probably don't want to get whacked by a shovel either. That leaves the green slime. This type of creature is best prodded from a safe distance rather than attacked. Don't have a ten foot pole? A shovel will do in a pinch.

The Level 2 list breaks down similarly. Not until we get to the level 3 monster list does the shovel start to seem outclassed, but I think it's just an oddity of the popular imagination that a sword seems like it would do much better. Against these creatures you really need higher hit dice or a magic weapon or both. And if that's the case, then why not play a Dwarven Shovelmaster (3rd level) with a +1 Rune Shovel?

How about weapon restrictions? There isn't anything that prohibits a wizard or cleric from carrying a shovel is there? Is your wizard tired of striking Gandalf-esque poses while not actually doing much that is useful? Put a shovel head on that staff and get busy! My point is this: If you can walk into a dungeon with a magic missile spell memorized then certainly do so, but bring a shovel too. 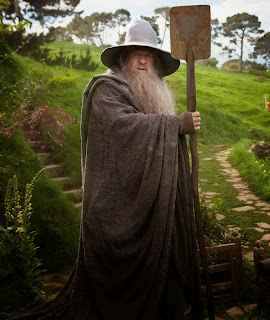 Regarding the 5e DMG that's coming out in about a month:

"There are rules for domains and managing a realm or business as part of the downtime system."

That's good news.  I think that experiencing the characters go from murder-hobos desperate for gold to movers and shakers in what is really a totally different game is a big part of the draw and what makes rpgs a unique thing.  Also kender will not be in the DMG which is really really good news.

"Here's what I'd do if I designed the game solely for myself.
More dice, fewer static modifiers. I'd use a die in place of the proficiency bonus. I like rolling dice and find it easier to teach that way."

"I wish the MM could be an app rather than a book. Working in page counts sucks, to be honest. I would've loved to break out tables of bonds, traits, and flaws for every intelligent creature in the game. Don't get me wrong, I love physical books, but on the digital front there's so much potential in breaking out of physical restraints."

This sounds cool, but I feel pretty sure WotC would do it all wrong. I want to see a They Stalk the Underworld app, that would be awesome.  and there could be links to things like John the Retired Adventurer's Wandering Monsters  Lair/Spoor/Tracks/Traces.

Somebody asked: "Will we see Dungeon and Dragon magazine again? Will there be digital content on the website, similar to the maps, art, and adventures we saw in the 3E era?"

and Mike said:
"We're exploring options for the magazines right now. Nothing to announce yet, but we know they're an important part of D&D's history.  That said, the magazine business is in rough shape. Subscriptions to them were dropping heavily in their last years in print, and that was six years ago. You can expect anything we do will be delivered digitally."

I'm still holding out for the D&D Mega-Blog.  Only WotC could do it, and it would be a reinvention of the magazine.
Posted by Lum at 8:31 PM

Everything you know about halflings is true.

WHAT IF everything you know about halflings is true?

They live underground, and are obsessed with comfort and pipeweed: 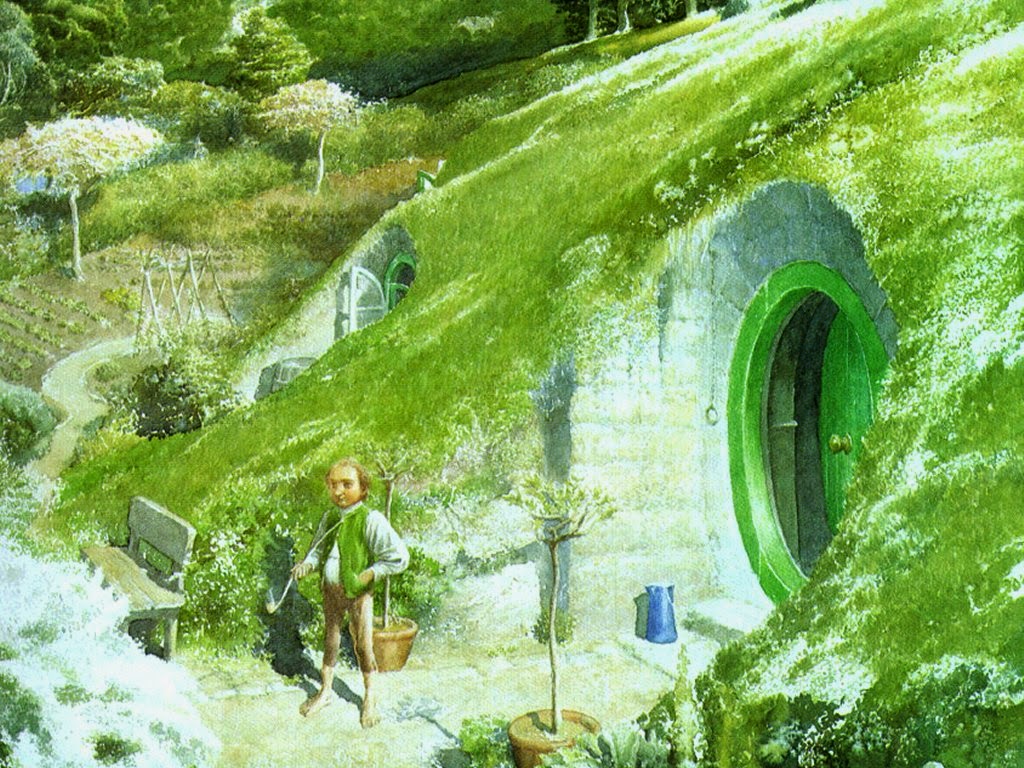 they're cannibals that want nothing more than to poke you to death and eat your face: 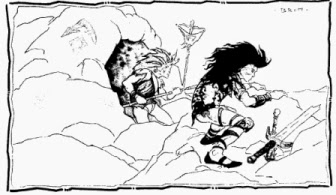 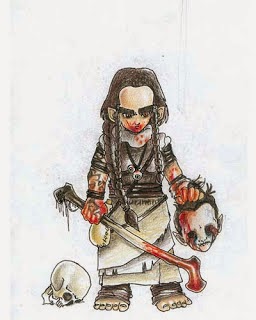 by this guy in Peru.  I love this picture.

Wait! They're basically regular folks, but smaller and with big hairy feet: 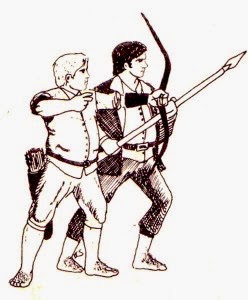 They pretty much don't believe anything you say: 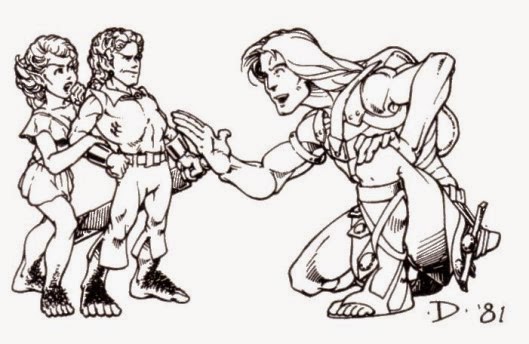 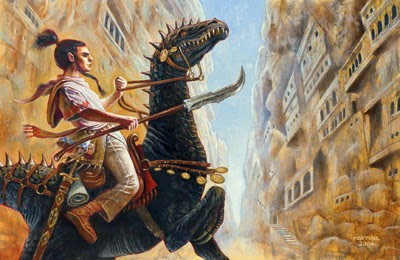 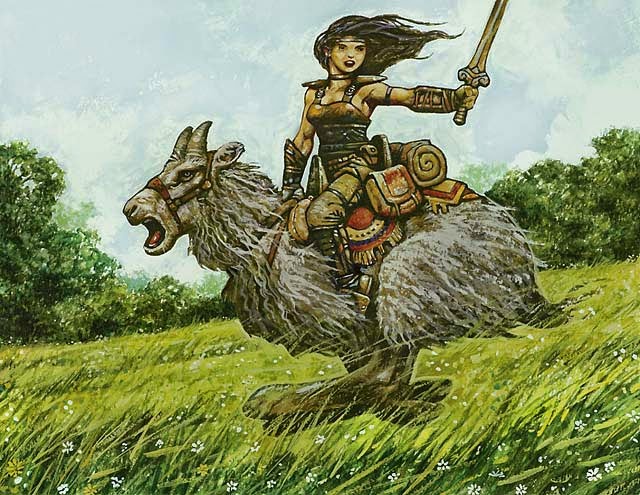 You've probably seen them training and riding around on other things too, dogs, pigs, lammas, etc.  It's all true.

They are weirdly pale with flush red noses: 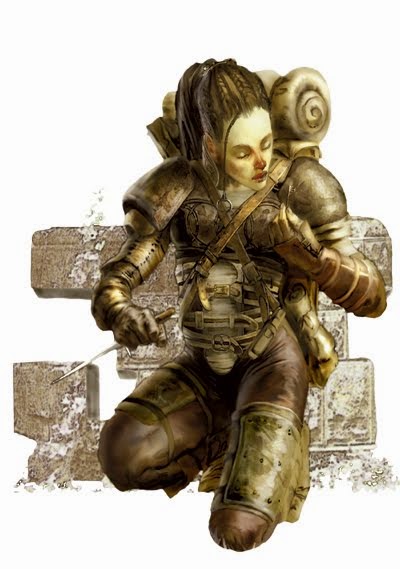 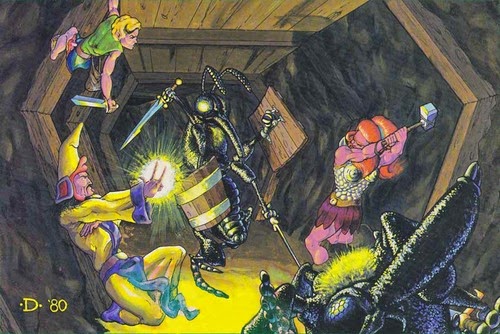 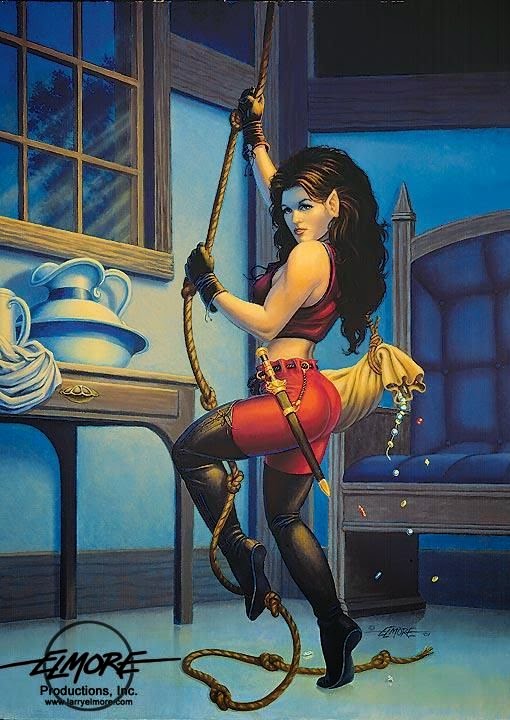 And they're good at skulking about.  In other words, they make great thieves: 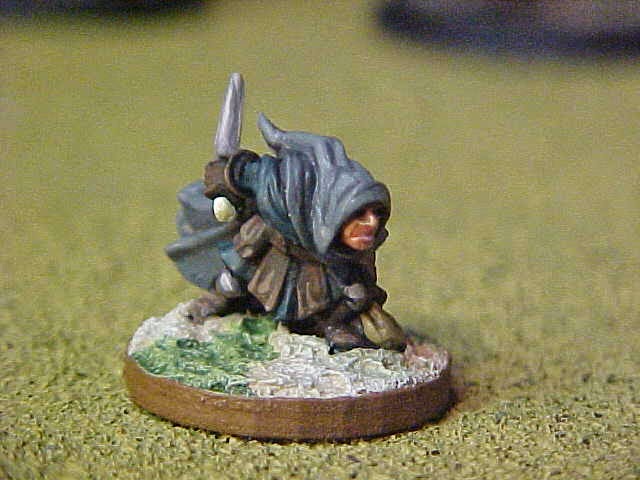 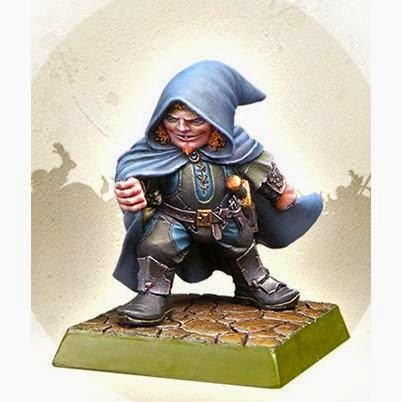 But some are crafty magic-users: 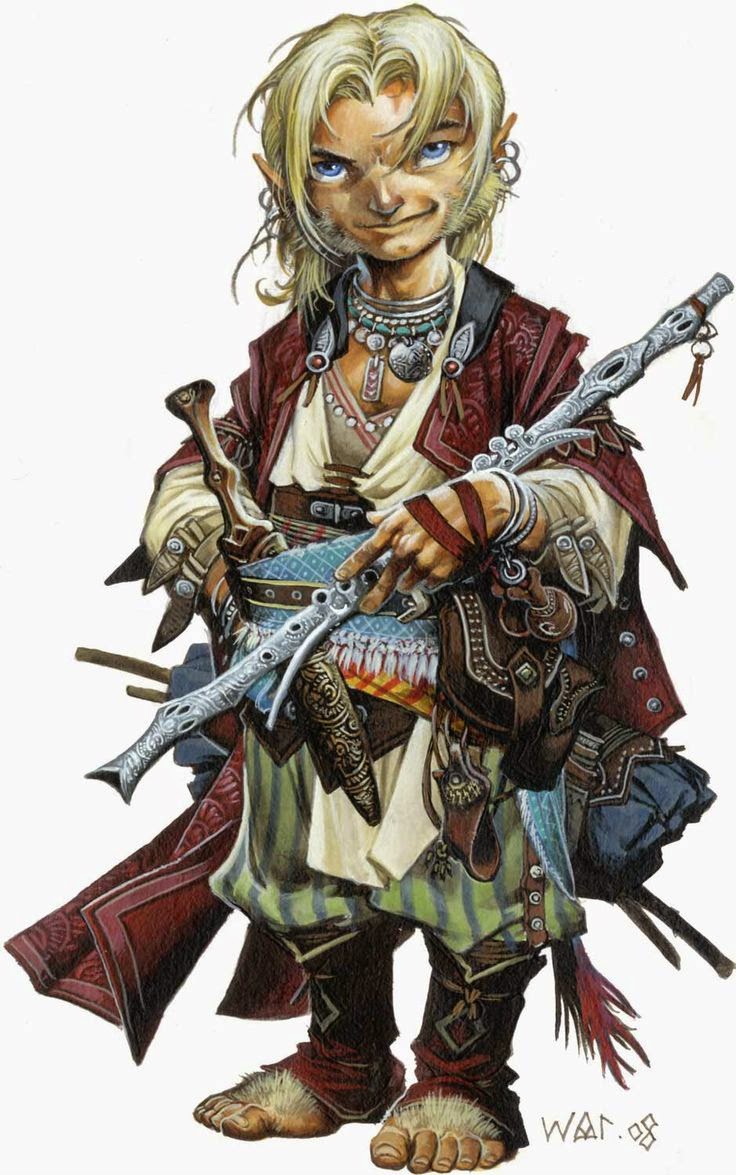 And some are just barbarians: 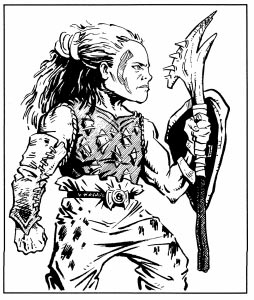 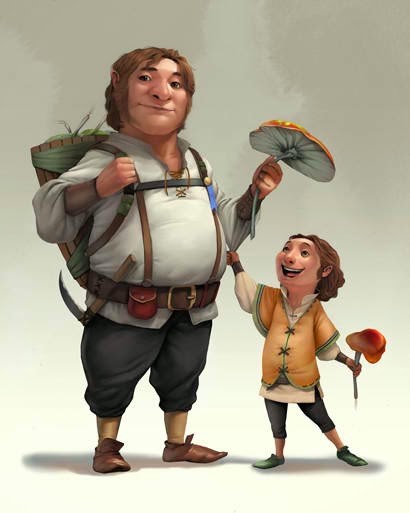 Oh, and they're into tattoos. 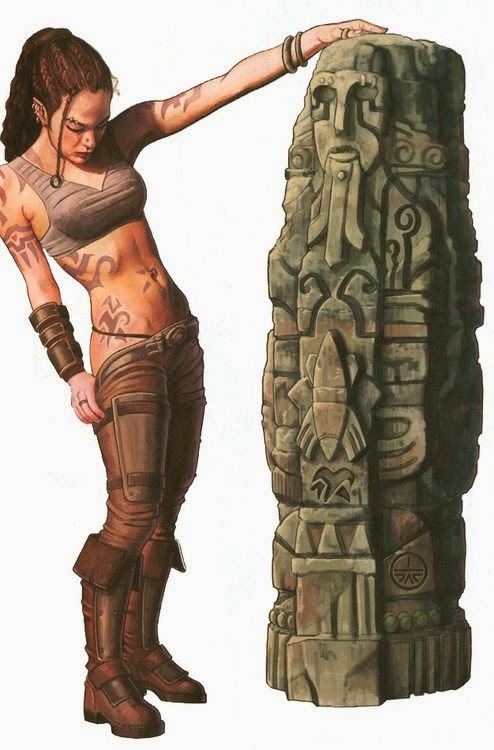 Got all that?  They're your basic smoking and shrooming albino cannibal pastoral hedonists who love their domesticated critters and the all finer things in life, including yours.