The idea that there should be a spell called "Beastial Inheritance" came into my head as I woke up this morning but my sorta still asleep brain didn't have time to figure out what the spell does.  Upon further reflection here's how I think it might work:

Beastial Inheritance
Magic-User  Level 4
The MU must ritualistically kill a lycanthrope with a cursed blade then sheath it or put it away. If the next time the blade is used it is used to ritualistically cut a normal animal and a human then the bodies and spirits of the animal and the human are combined into a new were creature.  The victim/volunteer need not be willing,  and the Magic-User may cast the spell on him/herself.  The creature will serve the Magic-User for the caster's level+2d6 days.

This spell gives the PCs the power to create whatever were-creature they want: were-sharks, were-chihuahuas, were-emus... That sounds like fun, right?  Note the spell says "normal animal" so no were-tarasques or were-dragons.

That was fun.  Here are a few more vaguely Halloween themed spells:

Necrotic Transformation
Magic-User  Level 3
As the Magic-User casts this spell they undergo a ghastly transformation into an undead creature. The player may choose one die/table on the Undead Remix tables each round if a save vs. magic/Cosmic Doom/Necrotic Transformation is made.  If the save is failed then roll the appropriate die and record the result.  Once a save has been failed the remaining die are rolled normally.  The spell's duration is the caster's level+d6 hours.  At the end of the spells duration the caster must make another saving throw.  If this is failed the undead state continues for another d6 hours after which another saving throw is rolled.  If that roll fails the caster forever remains undead.

Were-Golem
Magic-User Level 2
The material component for this spell is a bit of clay mixed with at least one drop of lycanthrope blood.  The spell must be cast just as the moon is rising and must be completed before the moon clears the horizon.  While the spell is being cast the clay is molded by the Magic-User into the form of a creature.  at the spells completion the clay will grow in size to the equivalent of a number of normal men equal to the caster's level.  The creature will come alive and serve the Magic-User until the moon sets.  The creature will have armor class as chain mail and will have the same HD as the caster.  The creature may have spikes or claws or wings or anything else that can be reasonably modeled in clay in a few minutes and they will be fully functional.

The DM should give the Player a ball of clay to mold to determine the nature of the Were-Golem that is created.  A timer of 2 minutes should be used to limit the time that the creature can be formed.

Moon Ray Cartography
Magic-User  Level 1
This spell must be cast on the night of a full moon.  A clear crystal worth at least 100 gp must be held aloft so that a moon beam may shine through it.  The light of the moon beam will form a map on the ground below the crystal.  This map will describe clues to the nature and location of a treasure.  Because the map will only last the caster's level+D4 rounds this spell is often cast over a bed of sand or unfurled roll of parchment to record the map.

Email ThisBlogThis!Share to TwitterShare to FacebookShare to Pinterest
Labels: magic

I've been thinking about towns lately.  Timrod's recent post about the lack of description about the town of Saltmarsh got me started, then I remembered this excellent post from Brendan.  I liked the aspects of the town Gorgonthorn that Brendan chose to write up, he focuses on being evocative and game-able.  The one thing that he leaves out are rumors and hooks to get you back out of the town which I think is important.  You could also add more info about factions and intrigue if that's your flavor.  Where I'm going with this is that I think we need a one page template for towns.  We have one page dungeon and wilderness templates, but I have never come across a one page town so I made one!

I've used Brendan's description of Gorgonthorn as the model for what should be included and added a place for rumors and adventure hooks.  Then to see if his three pages of description can fit on a single page I filled out the template: 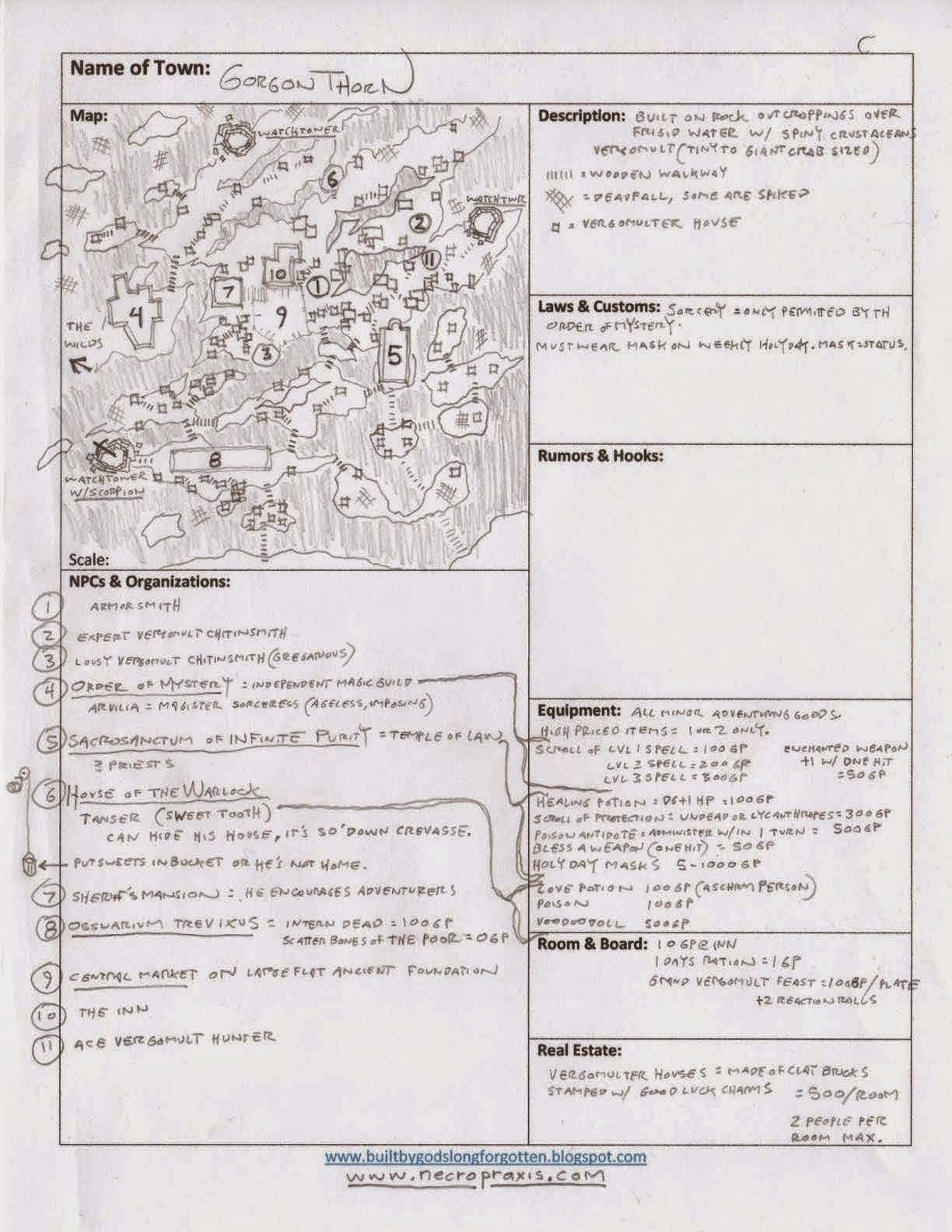 I think i managed to distill the important information that would be handy to have while running a game, and there is room to spare.  To save space I decided not to make a separate key.  Instead, anything keyed to the map is described elswhere on the page as appropriate.  I put all the keys under "NPCs & Organizations" but you could have locations keyed in other sections.  For example, if one of the rumors is that at the edge of town there is a old haunted house the key for that could be under rumors instead.

Here are links to the template:

This one is just in time for your Halloween themed games!  In this installment the remix includes the powers and abilities of the Undead creatures.  As with most of these remixes, I've looked to later editions (mostly the 1e Monster Manual) for some inspiration and added a few new elements of my own to fill out the tables but the bulk of the characteristics on the table are from ODnD.  Hopefully the result will be some creepy monsters that your PCs don't know what to do with. 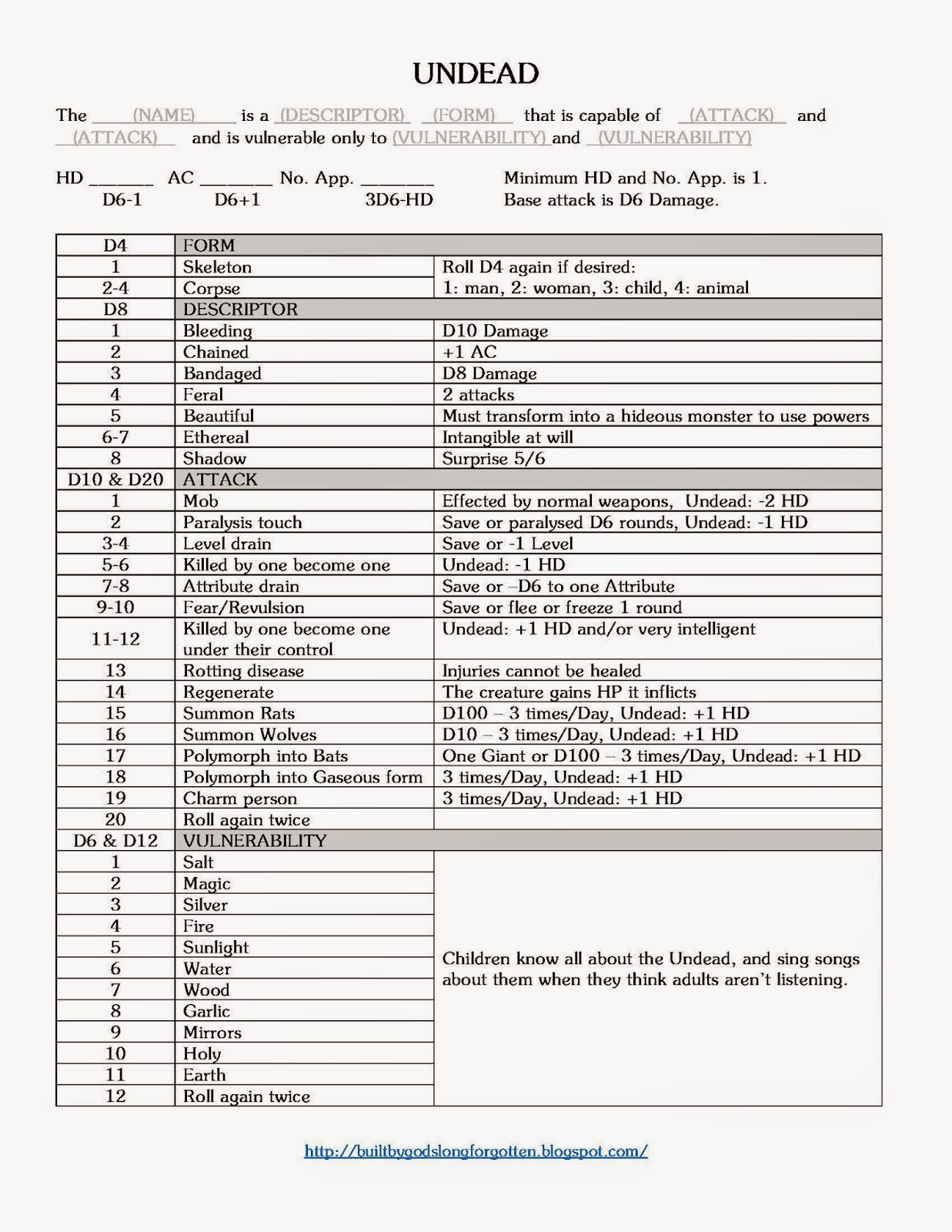 I'm experimenting with a different format for this one, basically taking a cue from Telecanter and added the sentence at the top to organize the rolls.

Let's try this out:

An animal corpse (I'm going to say it's a cow) actually appears beautiful (and otherwise normal) but goes all Jekyll/Hyde and turns into cow-corpse monsters.  They cause Level drain (by trampling) and fear/revulsion.  They are vulnerable to fire and garlic.  (HD: 1 AC: 3 No. App: 15)  I think the local villagers call them the Fell Herd and are totally terrified of them.

Bandaged corpses of women.  They cause fear/revulsion and regenerate.  They are vulnerable to mirrors and water.  (HD: 3 AC:7 No. App: 3 Dmg: D8)  These I think will be called the Shunlilly Sisters and the rumor is that they dwell in a big decrepit mansion at the edge of town, and Old Man Shunilly came back from a grand voyage with a mysterious treasure and then disappeared.

These remixes were inspired by Sham's pointing out how the monsters are categorized in the Monster Reference Table.  When I started doing these remixes Sham was still occasionally posting but the Grog n' Blog has been silent for years now.  I'm really grateful that the blog is still up, it's a great resource!

Email ThisBlogThis!Share to TwitterShare to FacebookShare to Pinterest
Labels: remix

I thought that I already put this up here, but it doesn't look like it.  This is the latest in my ridiculous and unnecessary remixing of all the the monsters from vol II: Monsters and Treasure.  I put the Save vs. Stone creatures together with the Lycanthropes and snuck in the Gargoyles.  The stoners and the werefolk aren't usually associated with each other.  In OD&D there's a cryptic Saturday horror movie matinee inspired connection between lycanthropes and vampires, but for these remixes Undead (including vampires) need to be their own thing.

In my mind the Gorgonae like to turn Lycanthropes into stone because they make the nicest statues, and their Lycanthropic bodies & souls can somehow magically interfere with the effects of the Gorgon turn-to-stone attack.  I don't think that background interferes with the remixing of the original monster write ups.  I'll leave it up to the DM to determine if Gargoyles are in some way magically bound to the Gorgon that made them or if they have their own society and hold secret enclaves on moonless nights to plan their flight to a mythical city in the South Sea.  Maybe a Gargoyle's autonomy depends on the intelligence of the creating Gorgon. 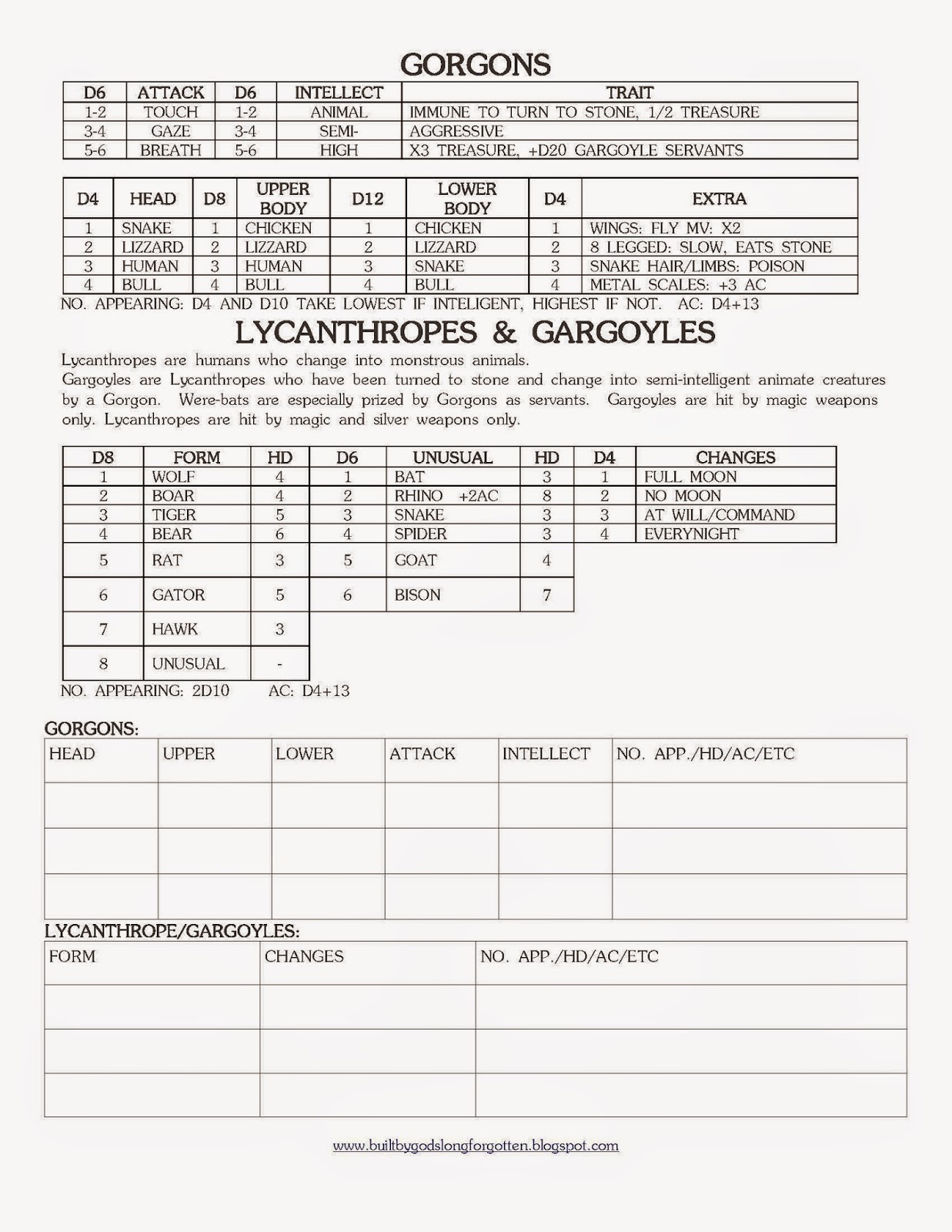 As usual there is a worksheet at the bottom to keep track of what's rolled up.

The only monster remixes I have left to do are humans and undead!  I want to redo Dragons to hew closer to the source material, but I figure I better get these all done before I start redoing them.