Armor in BX DnD is hella cheap. Why? Because it's old and crappy.

On any successful hit against a PC that does 6+ damage the player must roll a D6 and subtract that amount from the damage but also loose that many points of AC.

Armor can be repaired. It costs half as much as getting new armor.

Fancy/very well made armor can be found, sure. Doubling the cost raises the amount of damage that triggers a break by 1. Like this:

I like this because when making a character it doesn't change any thing. Armor costs what it says in the book, there's no weird rule to teach the Players. Then on the second or third session when the ogre hits one of your Players with his spiked war club and does 9 damage you can be like, "that's 9 damage, are you dead? yeah, shoot. oh wait, roll to see if your armor is busted instead." They'll be delighted, and then later you'll get to make up a funny voice for the armorsmith in the next town.

That was the first spell.  That's what some priests will tell you. But who knows? There were at least 8 different spellcasters at the dawn of magic in the world.  They formed schools and taught others what they had discovered.  Alteration was the most prolific and the most powerful at first. The school of Evocation had few spells but was dedicated to martial prowess. The young Evokers were constantly daring and dueling.  Abjurers, the magesmiths crafted Mage armor most of which no longer exists.  Of the lesser schools there are the extroverts: Enchanters and Illusionists and the introverts: Divination and Necromancy.  Of course, there were the Summoners. Some say they started it, others are sure it was the Evokers. Either way the Mage War lasted for generations. The Summoners fielded mages with battalions of crossbow wielding Unseen Servants upon whom the would cast Flame Arrow.  Then the Evokers developed the Fireball and Lightning bolt spells. The devastation wrought by these spells brought the first MageWar to a close, with a peace brokered by the school of Alteration, who would take the magic users into an age of exploration throughout the world via the Teleport spell or into the astral plane via accidents while using the Dimension Door spell. The illusionists, who along with the other lesser schools were but mercenaries during the Mage war began to increase the scale of their magic. They had always considered themselves artists, they were now treating the landscape as a canvas with the Hallucinatory Terrain spell. During this time the Evokers withdrew from the world, literally walling themselves off from the rest of the world behind fire and ice, iron and stone.

After a time the second Mage war occurred. This time the aggressors were the Necromancers who attacked the Evokers over long held grievances left over from the first Mage war.  The undead armies of the Necromancers nearly wiped out the Evokers before, ironically the Summoners newfound ability to Conjure Elementals put an end the the second Magewar.

For some time there was relative peace. During this peace there was friendly competition, even cooperation.  The wizards of this time began to see the divisions between the schools as artificial and they began learning from each other. This was a long period of prosperity as well as enlightenment, for with the Diviners newfound ability to Contact Outer Planes humanity was reaching far beyond previous understanding. Eventually a group of wizards, master of Summoning and Abjuration sought to tap the powers of beings from beyond. This cabal of Wizards was able to summon demons and bind them into their service with the Cacodemon, Spiritwrack and Trap the Soul spells.  Prosperity continued for a few short years before the demons were able to go free. These demons returned with an army and the third Mage war began. This time all wizards were united against this army of demonic aliens. The Mages of this era bore into the earth creating secret defenses and redoubts from the demons but the demons were able to penetrate and forever polute the magics of these places. It was a Summoner who eventually ended the final Mage war by casting a Wish spell so powerful it ended his life, but rid the world of the demon army.

Now, in the wake of this final Magewar against the otherworldly demons there is an uneasy truce amongst the magic-users of the world aided by the practice of wizards living in isolation in towers in the wilderness. Some chaotic magic-users and clerics (evil high priests) have chosen instead to dwell amongst the demons and monsters in the ruins of the underground fortresses created during the last Magewar.
Posted by Lum at 11:09 AM No comments:

BX DnD does some funny things with alignment. Moldvay calls the three alignments "ways of life" and implies a link to morality but glosses over life and death choices of good and evil. I believe this is an attempt to keep things light for the intended gamer, "adults, ages 10 and up" and at the same time it allows for a simplification in the game. The alignments sorts monsters and NPCs into groups: the ones that are here for you to kill and take there stuff, ands the ones who aren't.

I don't use alignment in my games. The folks I play with aren't in it to act out sadistic fantasies, but their also not going to flinch at harsher tactics so it's not really an issue. I like the idea of the kind of cosmic alignment that LotFP uses, but by requiring Magic-Users to be chaotic and making Lawful characters rare (and boring) LotFP reduces the number of decision points that relate to Alignment and I think that's unfortunate because Player decisions are what make role playing interesting.

Looming large in the background of old school DnD are the old Universal and Hammer Horror flicks.  From the monster list to the equipment list and the Cleric's primary power it's pretty clear that these movies were a major inspiration. I think the mileu of classic horror could help inform the alignment system in an interesting way.


The following alignment system was made with these goals:

There are three alignments: Good, Neutral and Evil.

Good characters with a belief in God may pray for temporary Protection from Evil. By making a Saving Throw - the Evil foe's Level or HD a Good character will be protected for 1 round. Praying with a Holy symbol will allow a roll with advantage and the duration will be the Praying character's Level.

Evil characters with a belief in an Evil God may make a Saving Throw upon death to return as malicious undead. After animating they may Save again to remain as permanent undead. (At the DMs option this may be reserved for special creatures or creatures with one or more Levels in a character class)

Good and Evil characters receive a +1 to reaction rolls with similarly aligned creatures and -1 with creatures of the opposed alignment.

Here's the map where our party is now, and a picture of a location we checked out. I didn't draw the Naga Temple, that's where the real action is. 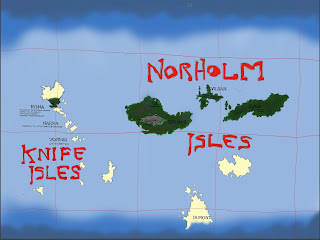 Prison of Imshiel and the World Map

Today while looking for the Sea Witch (we didn't find her) our PCs came across the Prison of Imshiel. We also had side conversations about the government of ancient Egypt, and whether or not the werewolf transformations in Hemlock Grove are better than the Howling. We ended up in a city of Pirate Undead and bought some invisibility potions from a vampire barkeep. I fucking love D&D. 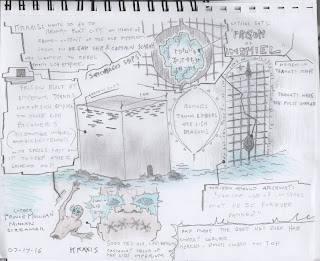 Also, after playing for years we have just recently made a world map and placed the various explored lands on it: 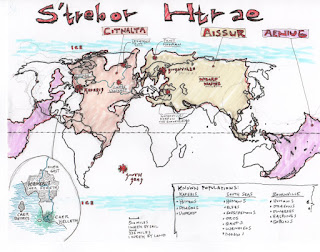 I've made a one page zine that's actually two zines. It's two one-page dungeons, one on each side of a single 11"x17" sheet.

On one side is the Dungeon Broadsheet #1: a cleanly presented location based adventure for low level characters for any old school fantasy adventure game. This is formatted so that it reads as a booklet with an 8.5"x11" centerfold map. The adventure involves a psionic froghemoth and the cult that worships it. 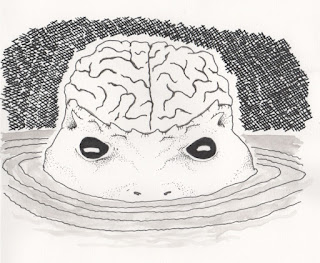 GRONOX just wants to go home and he's willing to turn your PCs into mutant frogmen to get there.


On the reverse side is PhASM #1: a single 11"x17" completely hand drawn and lettered map of the domicile of a space sorceress in a crystal asteroid. A few ideas for how to use this are suggested, but it is likely going to be a heist or roleplaying encounter rather than a simple dungeon crawl. PhASM is intended for any space opera or cosmic fantasy game. 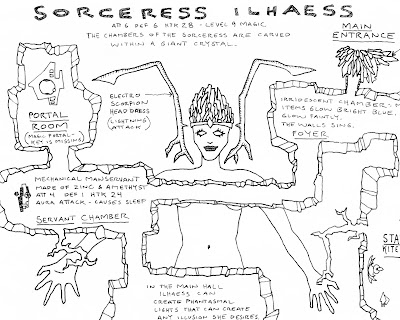 To see more pictures and to order click here:
Dungeon Broadsheet/PhASM #1
Posted by Lum at 12:31 AM No comments: