A while back I made characters with people who have never played the game before and I was reminded of the confusion surrounding the fact that you have an attribute score and a modifier derived from that score.  That experience gave me this idea that evolved into a really simple story-gamey version of D&D.  This is simpler than Red Box Hack or Dungeon World (at least based on my minimal knowledge of those games) and maybe closer to the original game rules.  What the DM does in the game described below is pretty much the same as a DM in DnD.

1. players roll 3d6 in order for D&D abilities. (Low is Good)
2. roll 3d6 and the single best (highest) die roll is your HP.
3. roll those three dice again, one at a time once on each of these tables:

Here's how it would work.
Any time you would roll dice in a regular game of DnD instead the Player rolls 3D6, or 2D6 if the DM says its really hard.  The DM says what ability is being rolled against (S, I, W, D, Con, or Cha) rolling over that ability means success.

The items don't add dice, instead they let you accomplish things you couldn't otherwise.  With an axe you might be able to chop down a door, with a bow you can hit somebody from across a room, what's a crystal let you do... etc.

The last die rolled above is like XP.  At the end of the game the DM writes down in order who generally acted the most in character.  The Player then gets that many bonus dice to add to any action or actions in the future that they want.  The DM can also give out Dice to PC's who act in line with their character in a way that is generally detrimental to the party.  For example, when the coward runs away, that PC could get a bonus dice to use later.

This isn't my ideal DnD, but I think something like this could be a great way to play with people who have never played an RPG before, and in that context, could be fun.

Lords of the Underworld

Who are the Lords of the Underworld?

Some are Gods, all but forgotten in the Sunlit Lands, clinging to the whispered prayers of a few dying cultists.

Some are long dead wizards, kings and emperors from the World We Know; despots and madmen undefeated by death, now vying for power in the Court of the Black Citadel.


The High Court of the Black Citadel
The lords of the high court are the most powerful beings in the Underworld. Each of these lords has a domain of their own, but they can often be found at the Black Citadel.

Alterius the Tryptarch is a ghost who inhabits three bodies simultaneously. The bodies change but one is always brutal and murderous, one is conniving and genteel and one is craven and kind. Alterious has divinatory visions but disagrees with himself on their meaning.

Baltagour is a god worshiped by patrician merchants and nobles long since corrupted.
The upper half of Baltagour is an obese shave-headed man with tattoos that float off of him like whisps of smoke. The lower half of his body is made up entirely of many long thin arms.

Ulzen is a beastial demon lord, a trusted general of the Lord of the Underworld himself. He commands a massive army of demons and beastmen who travel the Dark Sea, not in ships, but astride giant ghoulish mammoths who wade through the Dead. Ulzen sleeps with Heskatta, but secretly adores and spies on Elmeria.

The Four and Eighty Princes are skeletons who ride about the Dark Sea in caravels and knarrs made entirely of bone. They are petty and greedy and quite powerful with their bony hands in many and varied  machinations throughout the Underworld.

Hunhd is god of the centipedes. She moves with exacting precision in the unfolding of stratagems the goals of which are completely alien to human minds. She dwells in the decaying body of another god.

Muhlhaladred the Red Sultan often brags of the murders committed in his name. A few hundred years ago he was a bandit king who conquered half the world. Of all the high court Muhlhaladred perhaps has the most knowledge of and interest in if not influence over the World We Know.

Elmeria is the daughter of the Lord of the Underworld. She is pale, beautiful and raven haired. She longs to see the World of the Living but this is forbidden by her Father. When angered she may transform into a giant blue naga.

Morderex Pentefax is Lord of the Underworld and God of the Dead.
Morderex has many forms but he most often appears in the High Court as a giant man, strange and beautiful with long white hair and high cheekbones. When angered or feeling warlike his skin will turn a brilliant blue.
He may also appear as a robed skeleton, or a giant floating skull wreathed in shadow and flame and belching snakes. Morderex is a convivial host and enjoys conversation. He is also a psychopath who fancies himself beyond good and evil.

Ijahel is a vampire. He is cursed and must remain in the Land of the Dead. He is weak, starving and desperate for blood at all times. He tends a flock of demon goats who know a path to the World We Know. Ijahel is the Hayward of the Black Citadel, in charge of the hedges, twisted and ruined as they are.

Heskatta is a sucubus and Madame of the courtesans of the Black Citadel. They are generally bored, the dead are not very randy.

Pelawaque is a witch, a living woman disguised as undead with glamour.  She is queen of the Crows.  worms appear to crawl about beneath her gossamer gowns.  She hopes to seduce the Lord of the Underworld.

Hourcloth is a demon and a cook. He has a small army of goblin scullions and servants who help him make rare and extravegant feasts from the dreams of the dead.

Jimilshirk the Barber is obsessed with esoteric knowledge and objects. Being the cheif doctor of the Black Citadel he is an expert of undead maldies and medicines. Jimilshirk is a brain in a jar with many mechanical appendages.

Grom is the Lord's favorite hound. He is pitch black and bigger than a horse. He is keen eyed and sharp fanged. He runs the stables of the Black Citadel.

Venal Jim is the ghoul chief of pages of the Black Citadel. He lurks constantly.

Augerschwartz and Wigglewoorst are lean and red-eyed. No one knows what they do.

Schloosch is the Undine ewerer of the Black Citadel. She loves bawdy jokes.

To The Dark Sea Again

The Dark Sea setting that I started sketching a while back has been percolating in my mind again.  I stopped working on it because I realized how bleak it was, a sea of the dead, no light, Underworld with a capital U.  I set it up as dungeon/hex crawl treasure grab in the finest of old school traditions, but that started to feel wrong.  I saw it as a campaign setting unto itself, but now I think it could function really well as a diversion from a regular D&D game.  Here's how it would work:  Say a PC dies.  the DM can hint that there are ways to get them back.  Clerics that can cast Raise Dead.  But there's a hitch.  They need to find the soul  before they can cast the spell.  The surviving characters get go on an adventure into the Underworld!  I'm not sure why it took me so long to come up with that.

You could say that the recently deceased don't immediately become a part of the Sea, maybe they first go to the Black Citadel where they might get sold or traded to lesser nobles of the Underworld.  (Yep, I read Wraith: The Oblivion in high school.  Don't think it ever got played though.  Now maybe my D&D game can benefit from that finally.)  This is setting up a wheel-and-deal scenario rather than a straight fight, which makes sense since it's probably pretty tough to go toe-to-toe with a lord of the Underworld.

Any way, I've added a picture/link on the right to gather these posts.

Speaking of pictures here are some that inspire the Sead of the Dead: 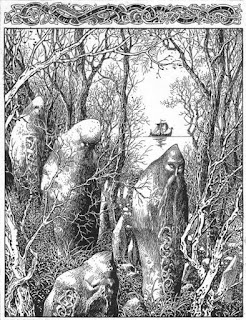 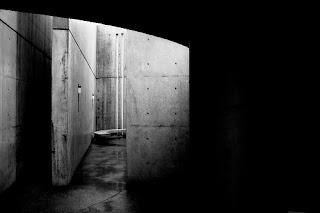 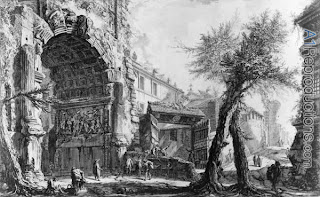 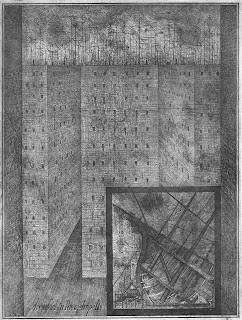 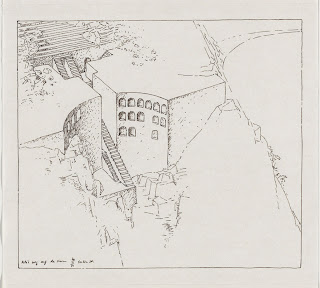 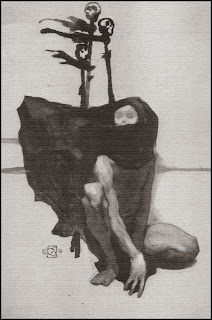 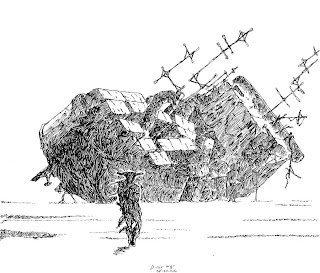 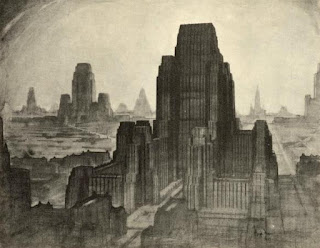 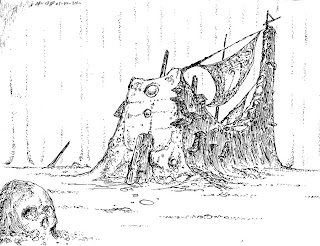 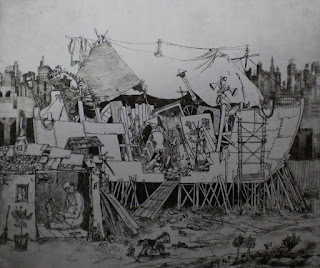 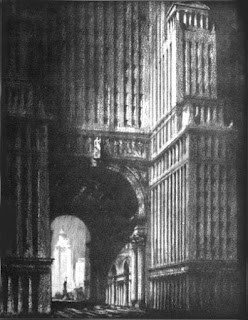 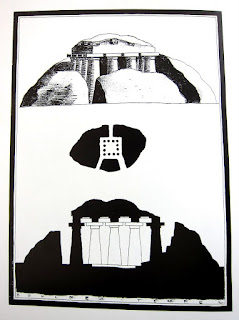 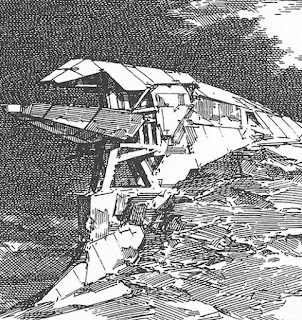 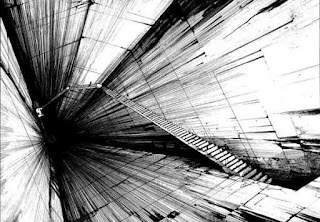 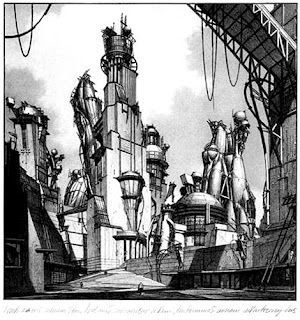 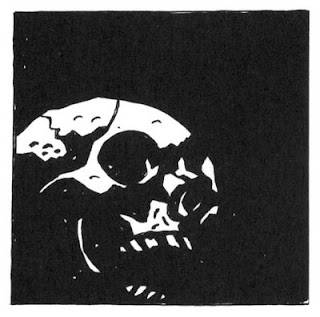 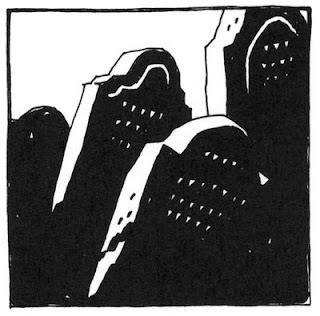 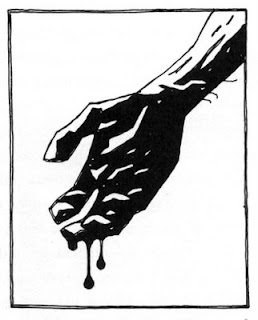 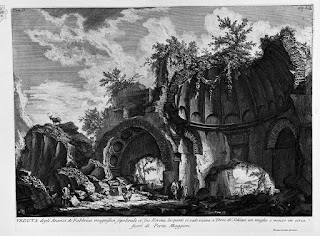 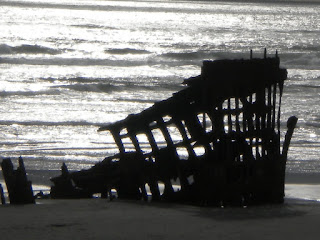 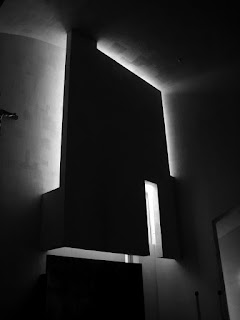 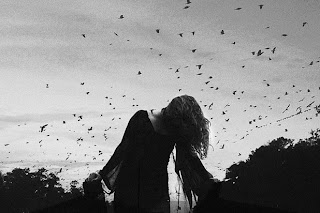 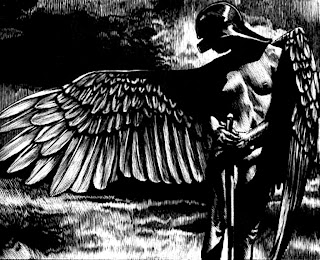 Special Abilities:
Powers per Telecanter. Skip step one at first level. Assume the character has the gift. roll step one every time the character gains a level. or +1 rank/lvl to an existing power or roll new power randomly and new power starts at rank 1.

Roll D12 or choose for one or more Psionic Traits:
1 third eye
2 pale blue skin
3 really big head
4 no hair at all even eyebrows
5 no iris - eyes are all white
6 finger and toenails look like microchips
7 blood is bright purple
8 weird stone flies around head at all times. If it is taken away the psionic becomes magnetic and will eventually die.
9 skinless cranium. transparent bones.
10 casts no shadow
11 people cant help but stare at character when present, but no one remembers what he/she looks like
12 ears like Yoda

Space Wizard:
as M-U except as noted.
Restrictions: none
Special abilities:
Must commune with Space Gods every night in order to get powers. Whether or not a Space Wizard gets a full nights sleep does not effect their ability to cast spells. powers are granted like clerics. Spell books don't have spells in them, rather their full of maps of constellations, the names of long dead gods from distant stars, rocket fuel recipes, things like that. 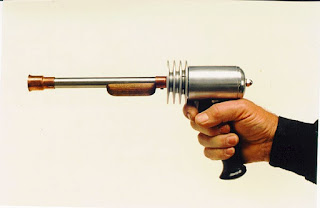 Space Wizards don't make scrolls, instead they can store spells in their wands.  By performing a ritual that's one day long per level of the spell and putting 100 gp worth of powdered meteorites, crystals, moon fungus, etc. any spell the Space Wizard can put any spell they know into their wand.  A Space Wizard can use another Space Wizard's wand.  A non-space wizard can try, but there's a 2 in 6 chance that something really bad happens.