Just to make sure I don't get too good of a reputation, here's this: 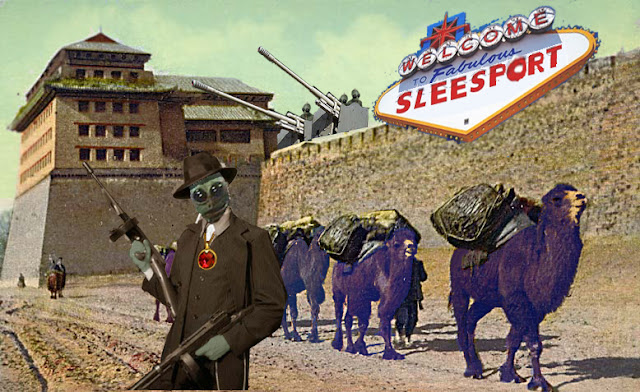 SLEESPORT
The Big City. A den of villainy. A hive of magical research. Inequality. Larceny. Gambling. Robo-sorcery.
Obvious facts:
Kobold ghetto
Huge casinos, Sleestak managers, human and kobold workers
Sleestak overseers, with robot servants
Visiting dwarf merchants, buttoned down, loathing the whole place
Visiting dwarf merchants, cutting loose
Rumors:  (roll D30.  Most of these are true, but that's up to the DM)
1There is a robot underground movement, robots who have shed there Sleesy schackles and escaped and now plot against their former masters
2 There are pylons in the desert, remnants of ancient Sleestak techno-magic
3 The Sleestaks have secret research facilities in the desert.
4 There is a pylon hidden in Sleesport
5 The Sleestaks can see into the future
6 There is going to be a massive shipment out of the Sleestak treasury soon
7 There are strange lights in the Desert at night
8 The visions you see while on Kobold psychedelics are true
9 the Sleestak treasury is guarded by a pair of giant robots and a squad of some of the toughest members of the Sleestak Mafia
10 the Sleestak Mafia is hiring outsiders for a secret mission (capture escaped robot wizard who can cast Detect Sleestaks at will)
11 The gladiator pits are a good way to make some quick dough (this rumor will come from a kobold, the gladiator pits are the only gambling facility the kobolds are allowed to control)
12 weird strangers are in town (giant intelligent cats, plant people riding rhinos, blue people, a flying squid, etc) are they here on business with the Sleestaks?
13 there's a big reward for a human princess last seen in one of the opium dens
14 the latest fashion craze is growing an eyeball on your chest by swallowing a pill.
15 giant monsters attack Sleesport every 100 years. The last attack was about 100 years ago.
16 Sleestaks all share the same memories
17 the latest fashion craze is dressing like a dwarf (heavy blue and grey wool) and wearing stilts
18 a human wizard has figured out how to crack the anti magic shell around all of the Sleestak casinos
19 no one is ever seen coming or going out of the Romulon warrior temple
20 a secret treaty between the Sleestaks and the Romulons just went south
21 the latest fashion craze is wearing a tiny robot on your shoulder
22 the latest fashion craze is already passé
23 the latest fashion craze is pretending to be your future self who has traveled back in time to the present
24 some of the dwarf merchant houses of Foulcrest hire bandits to steal their own trade shipments because they have a great insurance policy
25 the flying ships seen landing in and leaving the Sleestak imperial citadel are diplomats from other worlds
26 the Sleestak Mafia's secret technology comes from a place called Illinois
27 purple camels are highly intelligent, they only pretend to be dumb animals
28 somebody in the caravanserai is hiring thieves to break into the Sleestak imperial citadel
29 there is a beast in the sewers giving the kobolds all kinds of grief, killing and maiming, they need help
30 the guy who runs the giraffe stables is selling a map to treasure in the desert.Sleestak Mafia Amuletworks like a mystical cellphone.
Sleestak Mafia Tommygun
Once per day, can shoot a ray that turns the target into a robot. It's possible but difficult to save or dodge.  Any character hit, in addition to being a robot, will be under the control of the Shooter.  Over the course of days, weeks or months it's possible for some to resist the Sleestak's control, but they're still robots.  This is where the robot underground comes from.

Otherwise the tommygun shoots lazers that don't have to go in a straight line and do as much damage as a pole arm.
Posted by Lum at 4:23 PM