What's in the Woods part II 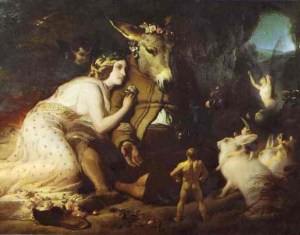 This is the companion to the "Beasts of Fairytale Miscellany" post from a while back.  This one, like the first is using the excellent classification of D&D Monsters laid out by Sham here.  While that set of random charts was a remix of the more monstrous or animal-like Fey creatures, this set remixes the Humanoids.  This includes: Nixies, Pixies, Dryads, Gnomes, Dwarves and Elves. 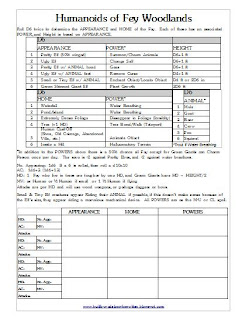 I added some powers not included with the originals to make these creatures more fearsome and/or appealing to the PCs.  You could, for example roll up a "fairy" who has the head of a bear, can cast a Geas on a PC and turn invisible.  (the PCs better hope that reaction roll goes well!)

The default creature is an "elf" but the definition of elf is wide open.

The stats in the middle are actually pretty representative of the original material.  In play I don't think I would stick to the number appearing or use it only as a rough guide.  I think I would make encounters with individuals or mixed parties more likely than a bunch of fey with all the same properties.  Though I would keep the Home consistent even with a mixed group.

The bit at the bottom of the page there is so the DM can note whatever type of Fey creature is rolled/encountered.  That's there because this (as well as my other creature remixes) are intended for that moment in-game when the PCs go in a direction that you didn't expect.  You could of course also use this in advance if you wanted to.

Here is a link to the pdf:  Humanoids of Fey Woodlands

When I get a chance maybe I'll bundle these remixes together.
Posted by Lum at 9:15 PM